by The Energy Intelligence
in Nuclear Power
0

At the end of December 2019, the global operating nuclear power capacity was 392.1 GW(e), comprising 443 operational nuclear power reactors in 30 countries.

At the end of December 2019, the global operating nuclear power capacity was 392.1 GW(e), comprising 443 operational nuclear power reactors in 30 countries.

This is according to the International Atomic Energy Agency, IAEA in its annual nuclear power status data for 2019 released yesterday and collected by the Power Reactor Information  (PRIS).

PRIS, developed and maintained by the IAEA for over five decades, contains authoritative historical and current quantitative information on nuclear power reactors in operation and under construction or in decommissioning phase.

Overall, nuclear power capacity since 2011 has shown a gradual growth trend, including some 23.2 GW(e) of new capacity added by the connection of new units to the grid or upgrades to existing reactors. 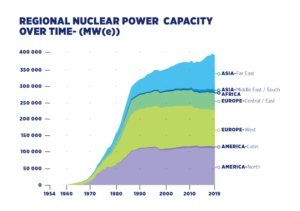 In 2019, though, total global capacity decreased by some 4.5 GW(e) compared with 2018, a figure that reflects Japan’s decision to permanently shut down five reactors that had not generated electricity since 2011.

At the end of 2019, over 57.4 GW(e) of capacity (54 reactors) was under construction in 19 countries, including four that are building their first nuclear reactor.

Near and long-term capacity growth prospects are centred in Asia, which at the end of 2019 reported some 36.5 GW(e) of nuclear power capacity (35 reactors) under construction.

That accounted for about 10% of total global electricity generation and nearly a third of the world’s low-carbon electricity production.

Nuclear generation has continuously grown over the past years, expanding by more than 9 per cent since 2012.

In 2019, six new pressurized water reactors (PWR) were connected to the grid, resulting in an additional 5174 MW(e) of nuclear power capacity. 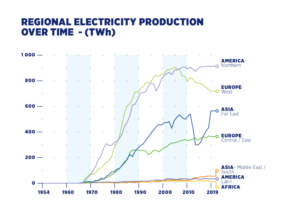 In addition, three nuclear power reactor units with a total capacity of 1174 MW(e) were connected to grid in Russia, including Novovoronezh 2-2 (1114 MW(e)) and the world’s first commercial floating nuclear power plant ‘Akademik Lomonosov’ which comprises two units of 30MW(e) each.

The reliability and safety of nuclear power reactors have continued to improve over time.

Compensation in the billions