Over 27 per cent of global electricity now comes from renewables, up from 19 per cent in 2010

by The Energy Intelligence
in Solar Energy
0

The share of solar photovoltaic (PV) and wind power has grown more than five times since 2009 – a remarkable rise attributed largely to continued cost declines for these technologies.

In 2019, a record 200 gigawatts (GW) of renewable power capacity was added, more than three times the level of fossil fuel and nuclear capacity translating to over 27 per cent of global electricity. 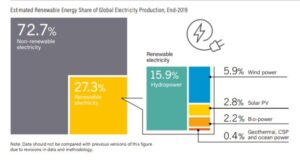 This is according to the recently released 2020 Global Status Report by the Renewable Energy Policy Network for the 21st Century (REN21).

The share of solar photovoltaic (PV) and wind power has grown more than five times since 2009 – a remarkable rise attributed largely to continued cost declines for these technologies.

Globally, 32 countries had at least 10 GW of renewable power capacity in 2019, up from only 19 countries a decade earlier.

In most countries, producing electricity from wind and solar PV is now more cost effective than generating it from new coal-fired power plants.” 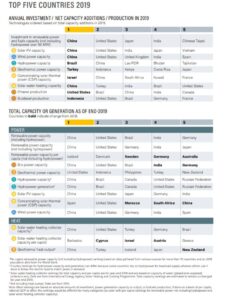 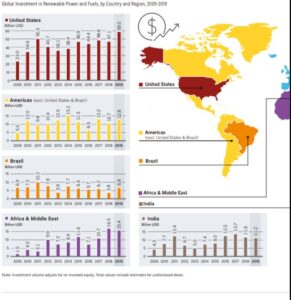 Further analysis of the report showed that Biodiesel production increased 13 per cent and Indonesia became the world’s largest producer, overtaking the United States, where production declined some 7 per cent.

In the electricity sector, bioenergy’s contribution rose 9 per cent in 2019, to 501 terawatt-hours (TWh). China extended its lead as the largest country producer, and bio-electricity growth also was strong in the EU, Japan and the Republic of Korea.

It continued, “The global hydropower market, as measured in annual capacity installations, contracted in 2019, continuing a multi-year trend of deceleration.

New capacity totalled an estimated 15.6 GW, raising the global installed capacity to around 1,150 GW in 2019.

Hydropower generation increased 2.3 per cent during the year 2019 to an estimated 4,306 TWh, reflecting not only increased capacity but also significant localised variability from shifting weather patterns and other operational conditions.

The decade ended with strong demand in Europe, the United States and emerging markets around the world, more than making up for a substantial decline in China. 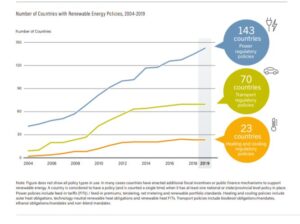 Asides China, the global market grew around 44 per cent.China continued to dominate the world market as well as manufacturing, having a significant influence on both.

During the year, solar PV accounted for around 10.7 per cent of total generation in Honduras and substantial shares also in Italy (8.6 per cent), Greece (8.3 per cent), Germany (8.2 per cent), Chile (8.1 per cent) and elsewhere.

By year’s end, enough capacity was in operation worldwide to produce an estimated 2.8 per cent of global electricity generation.

An estimated 0.7 GW of new geothermal power generating capacity came online in 2019, bringing the global total to around 13.9 GW. 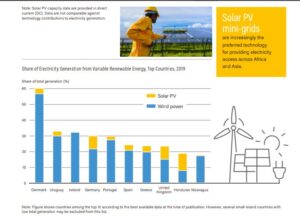 Not surprisingly, Ocean power represented the smallest portion of the renewable energy market, and most deployments to date have been small-scale demonstration and pilot projects.

Following a turbulent 2018, the ocean power industry regrouped in 2019 and continued its gradual advance towards commercialisation.

Net additions in 2019 were around 3 MW, with an estimated 535 MW of operating capacity at year’s end.

Significant investments and deployments were planned for 2020 and beyond.

Ocean power development has been concentrated mainly in Europe, where tidal stream devices generated 15 gigawatt-hours (GWh) in 2019 (up 50 per cent from 2018).

However, ocean power was gaining momentum in Canada, the United States and China, which offer generous revenue support and ambitious research and development (R&D) programmes.

The global wind power market saw its second largest annual increase, with offshore wind accounting for a record 10 per cent of new installations. 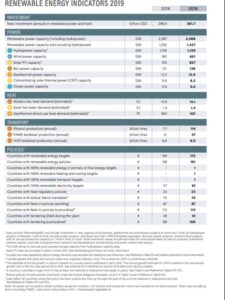 The rapid growth was due largely to surges in China and the United States in advance of policy changes and to a significant increase in Europe, despite continued market contraction in Germany.

New wind farms reached full operation in at least 55 countries, and by year’s end at least 102 countries had some level of commercial wind power capacity, ” the report added.

The Energy Intelligence is a leading energy media consultancy providing senior decision makers access to indepth analysis and commentary on the energy sector.