The Gas-to-Power Nexus in Nigeria: Challenges, Prospects and Outlook for Investments (I)

by Ivie Ehanmo
in Gas
0

“COVID-19 has shown that no country can respond to a pandemic without power and that energy access, quite literally, saves lives. A lack of energy access has the potential to magnify the human catastrophe from COVID-19 and significantly slow a social and economic recovery from the virus”

The global pandemic has imposed an unmatched challenge on humanity and global economies.

COVID-19 is rewriting the future of the global energy landscape in terms of the role of fossil fuels and renewables. Now more than never, societies are under pressure to ensure the existence of cleaner, greener, healthier and more renewable environments in improving the way of life of their citizens and their economies. Even more crucial is the need to ensure cleaner sources of energy in ensuring energy access in line with the global energy transition.

It is therefore no surprise as to why Gas as a fuel source is gaining significant momentum in the wake of the pandemic. Gas remains the cleanest of fossil fuels and growth in demand for gas is on the increase owing to several factors some of which include- gas as a cleaner and preferred fuel for power production, decline in the purchasing power of the dollar, upward price pressure occasioned by a shift in the supply and demand balance as a result of the expansion of global economies, energy price increase occasioned by increased costs of technology required to explore and develop new hydrocarbon reserves in deep offshore locations, (e.g. the Russian Sakhalin province), gas as a traded commodity with spot markets like oil, thus closing the price gap between oil and gas, etc.

Most importantly, the increase in gas demand is driven by the global search for cleaner fuels, with gas emerging as the preferable alternate fossil fuel, especially in light of the global pandemic. It has been postulated that gas may be the last of the fossil fuels to be displaced by alternative energy sources.

Nigeria is taking strides to join the trend of gearing up its gas utilisation owing to its vast natural gas reserves and more importantly because of the revenue shortfalls occasioned by oil price volatility. Several policies and incentives are currently being put in place to achieve the country’s gas utilisation objectives, particularly to service the power sector.

Gas as a Feedstock and its Usage
Nigeria is a major oil producer with significant gas reserves, owing to the associated nature of oil and gas production. Nigeria ranks as the 9th country with the world’s largest gas reserves which is currently at about 203.16 trillion cubic feet (tcf) as at June 2020. Non-associated gas fields have generally not been developed since the discovery of oil in 1956 as gas was not considered as a commercial commodity and currently only accounts for about 6 per cent of the nation’s total primary energy supply.

Associated gas has generally been flared until the practice of gas flaring started attracting punitive measures as imposed by the federal government.

Although gas production is associated with oil, gas as a fuel source has varied end markets and/or products that can be deployed, some of which include:

-As an energy source

-As a feedstock (petrochemical industry)

-The production of high-value fuels and chemicals such as methanol, ethanol, gasoline and diesel oxygenated fuel blends.

Nevertheless, gas as a fuel source has not been adequately commercialised in Nigeria due to infrastructure challenges, inability to meet domestic gas demand and gas flaring practices among other factors.

In the context of Nigeria, according to the Ministry of Petroleum Resources (MPR), Nigeria flares an excess of 700 million standard cubic feet (SCF) of gas per day from 178 flare sites, which translates to Nigeria losing approximately $10 billion of revenue annually, equating to $2,00 per MMBtu, due to its inability to capture and commercialize flared gas in the country.

If flared gas is properly harnessed, Nigeria can produce 600,000 MT of LPG per year and generate 2.5 GW of power from new and existing Independent Power Plants to power the economy.

Therefore, there is an increased pressure to reduce gas flaring practices via the commercialisation of gas resources under the auspice of the Nigerian Gas Flare Commercialisation Programme (NGFCP). Reducing flaring and increasing gas utilization is a concrete contribution to energy efficiency and climate change mitigation.

Of significant importance is the production of gas for the power sector, considering that electricity generation from Nigeria’s grid is largely thermal-based, which means that about 80 per  cent of the power plants in Nigeria are fuelled by gas.

The Gas-to-Power Nexus: Status and Challenges

“With the benefit of hindsight, it can safely be said that Nigeria- “the gas province with a drop of oil”- wasted too much time developing its abundant gas resources. Nigeria has the world’s ninth largest gas reserves and yet badly lags behind peer-countries. Much of the gas ought to have been converted to electricity for its teeming population…”

Natural gas plays a key role in the future development of electricity markets, given that it serves as the least cost emission-intensive fossil generation option and in addition, it provides the needed plant operating flexibility to deal with intermittent renewable generation.

The benefits of gas as a commodity have not been fully explored in Nigeria, up until the recent drive by the Federal Government. Gas has always either been re-injected for oil production of flared in quantities surpassing those taken and transmitted by the Nigeria Gas Company (NGC) to the domestic market due to a plethora of issues ranging from inadequate infrastructure, sabotage, insecurity, pricing and allocation of resources to the domestic market, etc. with the power sector being the key beneficiary. 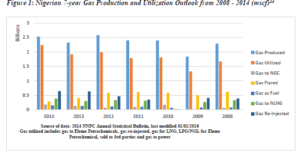 The power sector, though fraught with its own issues has been starved of sufficient gas for power production which if adequately harnessed will close the energy access gap between supply and demand in the Country, currently being managed by the use of private diesel or petrol generators with negative health consequences, as a result of the lack of sufficient gas resources for power production. Gas accounts for 60-70% of the cost of power in Nigeria.

Rahimpour and Jokar  compared three methods for recovering the flared gas of Farashband gas processing plant in Iran. These methods are GTL production, electricity generation with a gas turbine and compression and injection into the refinery pipelines. The results showed that the electricity production gives the highest rate of return (ROR), the lowest payback period, the highest annual profit and mild capital investment.

In 2007, the World Bank commissioned a large study by PFC Consulting to examine economic options for associated gas monetization in Russia. Electric power generation and development of gas processing plants were found to be the most efficient ways to use flared gas. In addition, it was concluded that at a netback price of around $1.42 per MMBTU close to 80 % of Russia’s associated gas could be economically recovered.

Despite the analytics and potentials, Nigeria has stranded generation capacity of at least 7,000 MW. For example, the ten Nigerian National Integrated Power (NIPP) projects with a 5,200 MW capacity started in 2004 and only just completed. In addition, 14 utility solar projects scheduled to deliver 1,100 MW are yet to kick off due to tariff considerations and general bureaucracy.

Nevertheless, the Federal Government is keen on strengthening the gas-to-power nexus in the country via various policy initiatives.

The Nigerian Gas Master Plan approved in 2008 seeks to stimulate the multiplier effect of gas in the domestic economy.

The National Domestic Gas Supply and Pricing Policy 2008, as one of its strategic objectives, seeks to facilitate and ensure low-cost gas access to spur rapid economic growth.

The Nigerian National Gas Policy, 2017 seeks to map out strategies for the introduction of an appropriate institutional, legal, regulatory and commercial framework for the gas sector with the intention of removing the barriers affecting investment and development of the sector.

The National Gas Expansion Programme (NGEP) Committee which was inaugurated in 2020 by the Minister of State for Petroleum Resources seeks to reinforce and expand domestic gas supply and stimulate demand via various implementation mechanisms, including the recent Framework for Implementation of Intervention Fund of the Central Bank of Nigeria in the Gas Value Chain which aims at stimulating finance and investment in the gas value chain.

The use of gas for power is an important policy goal in Nigeria especially considering that power is an enabling factor to stimulate and promote other industrial developments in the country. The purpose of the gas-to-power strategy is to encourage the use of domestically produced natural gas for power production and thus increase power supply to meet the country’s domestic needs for power. The benefits of gas-to-power are therefore limitless.

Natural gas can be used to supplement/offset base-load power-reducing GHG emissions as it provides consistent and reliable power. In addition, larger scale natural gas power generation could serve as an anchor client for developing large-scale capital infrastructure for pipelines, road/rail and supporting infrastructures in the country.

Ivie Ehanmo is a renowned multi-jurisdictional expert in the energy sector with over 12 years’ experience where she has been involved in a wide array of complex transactions for multiple clients in Nigeria and across Africa. She has and continues to provide expert legal, regulatory, governance and transaction advisory support to global institutions and agencies such as the World Bank, U.S Agency for International Development (USAID), Millennium Challenge Corporation (USA), United Nations Office for Project Services (UNOPS), United Kingdom Nigeria Infrastructure Advisory Facility (UKNiAF) among others. She is a Legal and Regulatory Consultant for Energy Market and Regulatory Consultants (a member of the MRC Group) and a Partner within the Energy and Infrastructure Projects Unit at the law firm of George Etomi & Partners. Ivie is a Doctoral Researcher at the Centre for Energy, Petroleum and Mineral Law & Policy [CEPMLP], University of Dundee. Her PhD (Electricity Law and Regulation) focuses on exploring Legal and Regulatory mechanisms to scale up investments in Power Markets across Sub-Saharan Africa. Outside work, Ivie enjoys spending quality time with her family, charitable initiatives and catching up on Netflix movies.